Philadelphia native Jeffrey “DJ Jazzy Jeff” Townes has been a household name in Hip-Hop for the last 30 years. From multiple chart topping hits as one half of the duo “DJ Jazzy Jeff & The Fresh Prince,” to a recurring role with Will smith on the popular TV show “The Fresh Prince of Bel-Air,” Jazzy has continued to be a relevant and revered figure in the world of music in general. To this day he continues to stay active in music industry, touring nine months out of the year, both domestic and internationally.

What many people don’t know about the legendary DJ: he has been a Delaware resident for the past nine years. Tonight at Moodswing Nightclub in Wilmington, DJ Jazzy Jeff will make an appearance in Delaware during what is sure to be a can’t miss event. I got the opportunity to sit down and talk to Jeff about where his career is right now, his feelings about the Delaware music scene and the independent music revolution.

DelawareHipHop.com: How did the opportunity to DJ at Moodswing come about?

DJ Jazzy Jeff: Well I get offers all the time to DJ not only in the states but around the world, so unfortunately I don’t get a chance to be home as much as I’d like to be. This gives me a great opportunity to work and be close to home as well.

DelawareHipHop.com: Does it feel different to DJ so close to where you live?

DJ Jazzy Jeff: Yea it does a little bit because I get a chance to invite friends and family to come see me DJ. That can be a good and bad thing because it gets hectic when you are dealing with people close to you, as opposed to being anywhere else where I only really deal with the people running the event.

DelawareHipHop.com: So not everybody knows that you have been living in Delaware for a while now. What made you move to the “Diamond State?”

DJ Jazzy Jeff: Well I’ve been here for nine years now and when I first started looking, I had a bunch of friends that already lived
here. I first looked in New Jersey and realized it was just way too expensive even though it was closer. Then I came to Delaware and just realized it was a better way of life all around for me and my family.

DelawareHipHop.com: What do you think makes Delaware’s location so special?

DJ Jazzy Jeff: I was always coming to Delaware every weekend to go shopping and I realized its right in the middle of everything! I’m pretty much less than 3 hours away from major market cities like Philly, New York, Baltimore and DC.

DelawareHipHop.com: How do you feel about Delaware and its current pool of musical talent?

DJ Jazzy Jeff: I’ve always said that you can find talent in any city in the world, from the smallest to the biggest. The fact is it’s all about the market and the opportunities that are available for artists to be seen and heard. It’s very important to have venues where you can go to and watch local talent. Open mics and local shows are the catalyst to creating a market for music in a particular area.

DelawareHipHop.com: How do you feel the internet and the independent music revolution have changed the game for artist looking to make it in the music industry?

DJ Jazzy Jeff: Many artists in small markets sometimes feel that they need to leave to become successful, and that may have been the case in the past but not today. Nowadays with internet marketing, it’s easier for artists to be heard by major labels, as well as build a fan base by marketing themselves. So it may be more beneficial for an artist to stay local and build their buzz, as opposed to moving to New York where everybody and there mom is looking for a record deal (Laughs).

DelawareHipHop.com: How do feel about the rise in popular artists staying independent and now signing with major labels?

DJ Jazzy Jeff: I think it’s great!! One artist I’ve worked with is Mac Miller and he has reached a lot of mainstream success while being independent. Then you also have Macklemore and Ryan Lewis who are independent and own the rights to their music and publishing, so when you hear their song played during the NBA Finals, all that money is going right into their pocket.

DelawareHipHop.com: So what’s next in the future for DJ Jazzy Jeff?

DJ Jazzy Jeff: I just want to continue to tour and produce music. I’m actually working on an album with my son which is a different experience, but overall I’m just excited to make people happy thru the art of DJing. If I can make a person’s day better and make them forget about anything negative by getting lost in the music, then that’s a feeling that will never get old for me. 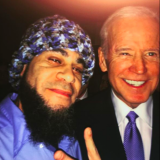